The Wellcome Genome Campus gets entrepreneurial 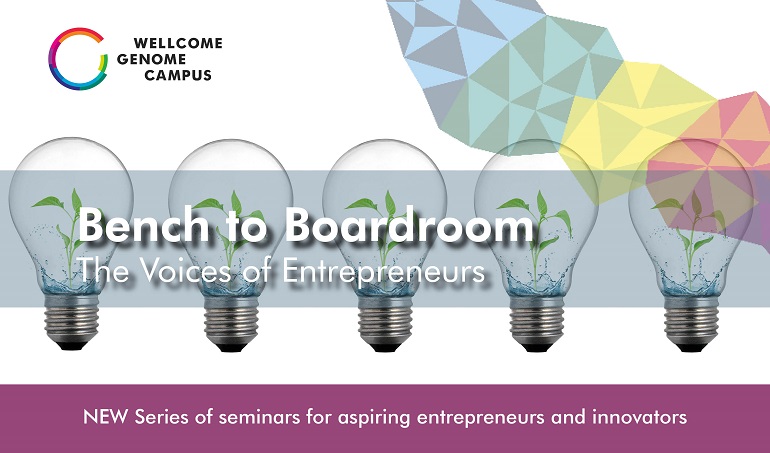 Mid-week at three o’clock in the afternoon, you’d be forgiven for thinking that many Genome Campus staff would be enjoying a much-deserved afternoon cup of tea. Instead however, on Wednesday 19th April 2017, Campus scientists were treated to a first talk in a newly-launched seminar series, “Bench to Boardroom: The Voices of Entrepreneurs”.

This seminar series will feature a range of entrepreneurial speakers from the genomes and biodata arena discussing their road to founding and running start-up companies. The first speaker we featured was Dr Paul Rhodes, CEO of Specific Technologies- the first US company to establish its UK office in the Biodata Innovation Centre at the Wellcome Genome Campus, Hinxton.

Paul started the session by introducing the science behind the cutting-edge technology around which Specific Technologies was founded. This involves a sensor system that can identify microorganisms by measuring small volatile metabolites produced by microbes grown in culture; essentially a unique fingerprint. Paul described how he was passionate in applying this technology to a field where he felt it would make a difference – as a diagnostic tool for blood infection.

The audience learned how blood infection is the most expensive condition in the US and costs hospitals more than $20 billion dollars annually. Strikingly, Paul described what an advantage his technology brought to this field, demonstrating perfectly his point that in order to raise a successful start-up your technology needs to be “disruptively superior and not just 20% better than what other established companies are already offering”.

To a mixed audience ranging from aspiring entrepreneurs, to those interested in working for start-ups, this message really hit home. Established companies certainly have advantages over newer and smaller start-ups, yet smaller companies are more nimble with an ability to quickly adapt to new challenges. With hindsight, these points may have seemed obvious, but to first-time entrepreneurs these pearls of wisdom from current CEOs are so vital. Paul also emphasised the importance of knowing your market and appreciating that one’s first product can, and often will generate several offshoots.

Coming from an academic background myself, I was interested to hear about the journey from academic research to innovation in the healthcare sector on a global stage. These were certainly valuable nuggets of information to those with an interest in scientific entrepreneurship. Paul also explained how his company was committed to investigating further research avenues, jointly with the Wellcome Trust Sanger Institute, emphasising the importance of open and collaborative working practices that help nurture innovative partnerships between companies and academia.

The past decade has seen an explosion of activity and exciting changes in the area of genomics’ research. With innovation in how we acquire, analyse and store ‘big data’ coupled with the dropping costs of sequencing, the Wellcome Genome Campus continues to expand and sits at the centre of the UK data initiative. Whilst research excellence and innovation has always been an important facet of the UK global political strategy, collaboration between the Wellcome Genome Campus and Genomics England2, for example, signals the increasing appreciation of using genomic data to benefit society as a whole.

Not limited to the public sector, we are seeing the coming together of academic institutions, pharma and biotech industries all with a shared appreciation of the value of this research. The most recent example being a global partnership between GSK, U.S.-based Regeneron Pharmaceuticals and UK Biobank who aim to generate further sequences from this large cohort1.

Against this exciting backdrop, the “Bench to Boardroom” series aims to bring together entrepreneurial scientists in the genomes and biodata field with other Campus staff and external researchers from the Cambridge Cluster. Coming up soon in the series is “Joining the data dots” with presentations from Repositive, Eagle Genomics and Genestack.

Towards the end of the year, we look forward to hearing from the team at Congenica, a global company founded on pioneering research from the Sanger Institute and based at the Biodata Innovation Centre.

Certainly, a lot to look forward to with a fantastic start from Dr Paul Rhodes.