Where do successful business ideas come from?

Steven Johnson, who is an American popular science author and media theorist has written a number of books on the subject of ideas and innovation. Johnson argues that the most important and valuable ideas take a long time to evolve and can spend a long time being dormant in the background. Johnson asserts that it can take between 3-15 years until an idea you may have been incubating can suddenly becomes useful to you. It is the antithesis to the “Eureka!” moment that is so often touted by the mainstream media as a domain exclusively for those with a genius mind. Johnson also says this is often because the really great ideas form as a result of their collision with other ideas; a partnership of minds that are pointing in the same direction is what helps an idea really take off. As for the kinds of environments that produce high levels of innovation, Johnson states that cafes and drinking houses are hotbeds for idea generation (since the Age of Enlightenment) – a kind of breeding ground for ideas that allows them to mingle and intertwine.

The story of SciBite’s formation could certainly fit this theory neatly, and it even features a café in Royston. Lee Harland and Rob Greenwood of SciBite shared their business’ story with us through one of our Bench to Boardroom seminars here on Campus. 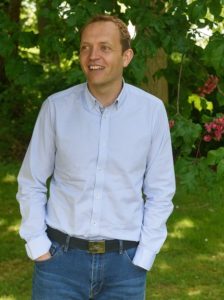 7 years ago, Lee Harland (Founder and CSO of SciBite) was moving house and as part of the move, he was having his oven cleaned by one of those firms who are able to transform a crusty kitchen appliance into a gleaming thing of beauty. It was during a chat over a shared cup of tea with the oven-cleaning guy that Lee found out this was the man’s 8th business venture and who assured Lee that it wasn’t all that hard to set up your own business.

Was this the birth of the idea?

15 years ago, Lee finished his PhD and felt lucky to get a job at Pfizer enjoying developing his own team there. All was well until early in 2011, the firm announced they were closing their offices in the UK. This meant of course, that Lee and members of his team had to go and find new jobs and whilst looking for opportunities, Lee had started working on a project that he has been meaning to kick-off for some time. He says: “The idea of having a business never occurred to me…” but after that fateful visit from the oven guy, Lee felt encouraged and eventually settled on a plan for creating a competitor intelligence/information management tool. “My aim wasn’t to go after the big pharma, the Elseviers of the world, it was to serve the little guys, so I started coding…” After about 9 months of writing code in the evenings from a study in his garage, Lee launched his first website. It was pretty successful with tens of thousands of users visiting the site, but there was no way to generate an income. Lee joked about having a fleeting idea that putting some adverts down the side of his new website would make him a millionaire, alas not! He shared with an audience a screenshot of his first receipt from Google for advertising revenue generated- it was for £66.00 (just over.) In a modest fashion, that’s so akin to his overall demeanour, Lee goes on to say: “I built a boat, a badly made one, without a rudder and ores but I was on the river and going somewhere.” Lee knew that he had to change things, so he decided to go to places, and started talking to people and showing them his website. “Someone told me it was cute…, I wasn’t sure what that meant.” Then Lee met a guy who worked for a pharma company who had expressed an interest in the code that made everything work and that’s when Lee decided to protect the code “…in case it ever became anything important.”

Ideas meeting other ideas makes even better ones 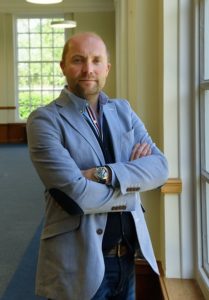 Rob Greenwood, CEO and President of SciBite first knew Lee from the Pfizer days. Rob then worked for Thomson Reuters running commercial databases for big pharmaceutical companies like Pfizer and he says “Lee was one of our really awkward customers…” but Rob and Lee struck up a friendship. They would occasionally meet for a drink when Lee was able to talk to Rob about his project and how it was growing; they still both had a day job at this stage, but Rob says: “All the free stuff you get in life is usually rubbish, but Lee created something free and it was brilliant. Ignoring the competitive intelligence aspect of the database. It’s the way it was tagging the data that is where the opportunity was.” Lee and Rob would occasionally meet in a café on the heath in Royston and at one stage it became clear to Rob that some people that Lee was talking to were trying to take advantage of the fledgling business and Rob didn’t like that.

When Lee and Rob began talking about their company, they didn’t talk about how they were going to make millions but rather how long they could survive without an income. Both agreed that receiving support from their families was essential at that time.

When SciBite started its operations, there was no office; Rob was working in a room above a garage and Lee’s base was in his bedroom. They had one other employee by then- Phil Verdemato (Head of Software Development at SciBite) who was somewhere in the depths of Kent. The reality was, that at that stage the company was really small, and they knew they had to figure out how to be taken seriously…

There’s no template for building a business 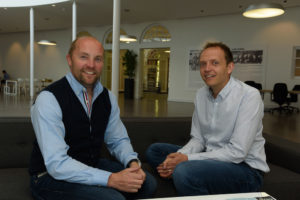 SciBite’s kernel team was in place and they knew they needed a strategy to underpin the business and figure out what could be done quickly to generate revenue so that the company could grow. Then and now, they continue to explore investment at all stages of the growth of the business.

When attending conferences SciBite started to see what they didn’t before… text mining tools were aimed at humans/scientists…people wanted to embed this sort of intelligence into machines. SciBite realised that their audience base was different from what they initially anticipated. Their product needed to be aimed at application developers and to get to those individuals a new strategy was created…the second version of SciBite was convened.

Rob said: “This is not a template for how to build a business. There were a few key decisions that we made that were really important to get us from where we were to where we are now.”

Do great ideas falter on their way up?

There’s no shortage of articles and interviews with entrepreneurs out there who would be very happy to attest to the fact that making mistakes has been as crucial to their eventual success in business as spending time on business planning or market research. Making a mistake in business is only embarrassing if you fail to learn from it.

Rob was very honest about the mistakes that they made, he said there were plenty along the way; such as involvement in projects that they shouldn’t have got carried away with “…you can get dragged down rabbit holes with science, the science is cool but the business dies…” and cashflow issues at one point that forced both Lee and Rob to consider self-financing and careful balancing of plans for hiring with growth. One of the many impressive things about SciBite is that they grew organically and even in the toughest of times did not take money from investors. Rob said: “Part of the roadmap was to innovate and fast, talking and listening to our customers.”

Today, the company (composed of mainly scientists and bioinformaticians) enables scientists to do amazing things. SciBite provides data-mining technology and the right level of expertise helping their customers to glean new insights from data. In addition to the team based in the BioData Innovation Centre here on Campus, SciBite now has 3 members of staff in Tokyo and another 3 in Boston MA, and have a plan to grow the company further. Before that though, they need to hire more staff- last year they doubled the numbers of staff and doubled their revenue.

For more information about SciBite, their team, job opportunities, and their products visit: www.scibite.com